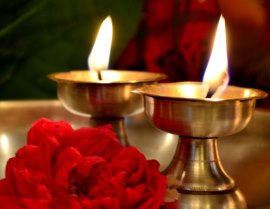 Aarathi is also performed at the time of welcoming of an honored guest, saint or newly wed couple and as a matter of fact in any auspicious occasion in hindu culture.

Aarathi is one of the sixteen steps (शौडशौपचारह- shodasha upachara) of the pooja ritual. It is performed with a lighted lamp in the right hand, which we wave in clockwise circling movements or in the shape of OM 🕉(औम) to light the entire form of Lord and have darshan of the Murthis. Aarathi is always accompanied by the ringing of temple bells, and often accompanied by singing, playing of musical instruments and sometimes by clapping.

Aarathi is often performed with camphor and it’s use signifies spiritual philosophy embeded in this ritual. Camphor when lit, burns itself completely without leaving a trace of it. It represents our inherent tendencies or Vasanas (वासना). When lit by fire of knowledge, which illuminate the truth within ourselves or Antharathma , the ignorance or ego in us will burn out without leaving a trace. The other well known aspect of performing Aarathi in Sanathana Dharma is to ward off evil eyes cast on one, particularly young children and infants. It is also believed that, we perform this ritual to ward of evil eyes on Lord himself after seeing his or her incredible beauty with our ignorant eyes.